Hola!
This is the middle of my last week and I have all types of emotions running through my head right now.
With the over 100 degree weather running me down, I ended up not going to Corpus Christi as i was sunburnt already from the days before. However, Saturday I took a trip to Cadiz for the day where I was able to see a different culture in Spain. Cadiz was one of my favorite places on my travels so far.
Posted by Unknown at 2:41 PM No comments:

So far, this week has been nothing but hot. Every day for the past week its been above 90 degrees (34 degrees Celsius) often being above 100 degrees for a couple of hours. I always enjoyed warm weather but this heat has been wearing me down quicker than i thought. This makes me enjoy Wisconsin's weather, where it is not too hot during the summer. After getting back from Marbella, where it was about 20 degrees cooler, I have been wishing to go back to the cool breeze and bearable weather.
With the weather being so hot, one can only stay outside for so long, so my roommates and I spent a lot of time at the plaza next to our homestay and in our homestay (however, our house does not have an AC that reaches the bedrooms so our part of the house is HOT).
With the time I did spend outside, it was later at night when the weather was cool. My roommates and I walked around the river and enjoyed some live music that was going on. The boardwalk is a very peaceful place to relax and hang out with some friends.
One of the things that I found different here than in the US, is you don't invite friends over to your house as it extremely rude to your parents/host parents. Instead, since the houses are so small, many spend time going to the plaza's and parks to hang out. I find that I like it a little more as it makes you more active and also enjoying the fresh air.
Today, It is a holiday in Sevilla, where it is called Corpus Cristi, and the celebrate the body and blood of Jesus Christ.
I will write about my experience here in my next post! :)

Hola!
This past week was super busy; I am taking two classes here while I am in Spain and last week was the end of my first class and the beginning of my second. I had a 5 page paper to write and a final to study for, for my first class and multiple readings to do for my second class. I had class for 6 hours every day, which really brought me back to the days of high school. However, I noticed that my spanish language has improved a lot from before; when i first got here, I barely knew how to hold a conversation and now I am able to complete an order and get directions from locals in Spanish! This past week, I slept a lot and spent the little free hours i had walking around the city.
This past weekend, I spontaneously decided to go to Marbella for the weekend with a couple of friends, which was so totally worth it. The houses were beautiful and the area was even more beautiful (Even though I didn't see Antonio Banderas or any other famous celebrities). In Sevilla, it is currently 105 degrees so taking a break from the heat and going to where it is 85 was a good change.
In Marbella, I made another spontaneous decision and decided to go parasailing -- best decision I've made in a while. The view was to die for and it was so peaceful up there; i didn't wanna come down.
I still have two more weeks here in Sevilla until i head up and take another month and a half up of traveling around Europe. Cannot wait for what is to come on my trip.
Adios!

My weekend started off on Friday afternoon after class when I took a 3 hour bus ride to Lagos, Portugal! After we arrived, we went straight to the beach for a couple hours before we had a pool party & pizza for dinner. After, I was able to go and explore the town a little bit which I fell in love with! (Might have liked it a little more than Sevilla ;) )

On Saturday, we spent around 6 hours at the beach, where I was able to take a boat ride through the coves which took my breath away. I also, got a little sunburnt (again) but it was completely worth it for the view. For dinner, I went to a Mexican restaurant called the Green Room, which I would totally recommend to anyone visiting Lagos. You get a lot of food for little money, which is what I am all about right now.

Sunday, we packed up and headed home early in the morning where I spent the rest of the day sleeping, which I need for this week.
Until next time,
Hasta luegos 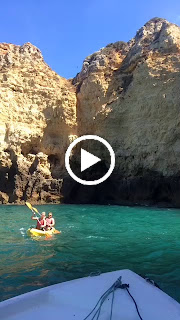 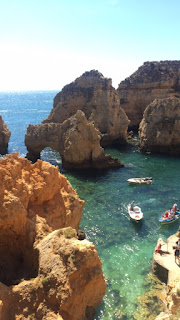 Posted by Unknown at 2:57 PM No comments:

Hola Amigos!
I'm sorry for the late post--I know you are all itching to know what I have been up to for this past week. I was gone for the weekend in Lagos, and when i arrived home, the wifi was out at my
host mom's house. :(

My week was started on Monday by visiting the Archivo de Indias, which today, is an archive of people's journey to the New World (aka the Americas and Philippines), including Christopher Columbus' journey and maps and Pope Alexander VI letter that divided Spain and Portugal. The place was originally built after there was a need to find a new trading spot in Spain, and Sevilla was the perfect spot as it had easy access from the river. This was a cool place to visit, but you can only see so many old books, unless you're really into history.


The plaza was created in 1929 for the Ibero-American Exposition World's Fair that Seville hosted.
Today is consists mainly of Government buildings, but it is also the main tourist attraction for Seville. To make it even cooler, it was used as a filming location for many famous movies, but the most famous is Star Wars - Attack of the Clones!

I was able to fit in some activities in before the weekend besides my exam I had on Wednesday (Yes, we have exams here) such as walking around the city and trying new food (such as churros and montaditos, which are little sandwiches) and I was able to paint a tile with watercolor that got fired in a kiln, which is a very popular thing to do in Seville.

All in all, it was a great second week in Sevilla!

PS - I'm sorry that I don't have any photos for this week, my phone randomly decided to delete all my pictures so i am currently in the process of restoring them!
Posted by Unknown at 9:36 AM No comments:

I have officially been here for a week and i'm loving it as much as the first day I was here; possibly even more.

I'm starting to notice the smaller things when I'm walking around the city that i didn't when i first arrived, such as -- little shops that hide behind the bigger buildings, and the different architecture on the buildings and quicker streets that I can take home. I no longer am feeling like an American tourist that has no idea where/what they're doing -- besides the fact that people stare at me because i have blonde hair.

The weather here has been incredibly nice--it's weather that rarely drops below 70 degrees at all parts of the day. It is dry heat which makes it a lot more bearable, but you also get sunburnt easier i found (As I got sunburnt for about the second time in my life, and on all parts of my body).  Everyone here wears pants and long sleeves when it is 90 degrees, and i don't understand how they do it. My body is sweating as soon as I walk outside in shorts and a tank top!

Besides that I am enjoying my stay here and i am making awesome memories! Besides that, enjoy this timelapse I made going down the streets of Sevilla!

My first week in Spain was nothing but exciting. I learned and experienced so many different things, met some incredible people and ate some amazing food.

So far I have visited some breathtaking locations in Seville, such as the Lebrija Palace, Real Alcázar de Sevilla and the Cathedral of Sevilla.
Before coming to Spain, I never thought that there would be so many palaces and cathedrals in one city.

The Lebrija Palace was built from floor to ceiling with a wide variety of architectural styles. The statues and mosaics were one of a kind and it was truly a great site to see. Plus, I wouldn't mind living in here either. 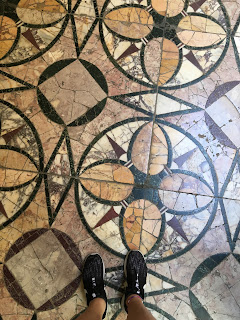 Real Alcázar de Sevilla absolutely took my breath away. The creative layout and multiple gardens made me fall in love with this place. The place was so big that I could spend an entire day exploring the palace and I would still have more to see. A part of Game of Thrones was also filmed here, which one can completely see why! To make it even cooler, a part of the palace is still being used today by the royal family, which makes it the oldest official palace to still be used! 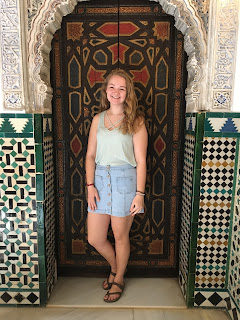 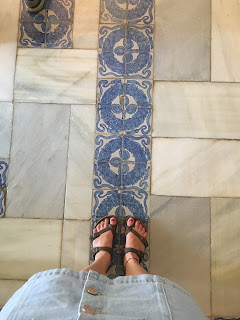 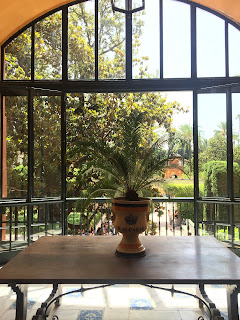 Cathedral of Sevilla took me by surprise, I would definitely say this was one of my favorite stops so far. Walking into the middle of the Cathedral, my jaw dropped as I saw how tall the ceilings were. This cathedral is the largest gothic church in the world and the 3rd largest church in the world! The church has a great mix of the Muslim vs Christian reign of the cathedral, as was initially a mosque until it was conquered by the Christians in 1412. The altar was plated with all gold and the multiple paintings and sculptures along the walls made seeing the place incredible. There is a tower (La Giralda) that is connected to the cathedral, where you have to walk up 35 ramps to get to the top, however, the view was so worth it. I was able to see the entire city of Sevilla, which made me fall in love with this place even more. The cathedral became more special to me as multiple important people are buried here. San Fernando III, the one that took over the cathedral is buried here, and I will also be able to see his mummified body on Tuesday, which is unveiled in the cathedral in honor of San Fernando day. Christopher Colombus is buried here as well, which i thought was extremely cool.


In all the site seeing I did, I was able to do a couple other cool things in my free time such as watch a Flamenco show and take a trip to the beach to a little town named Rota, which is very close to the city Cadiz in Spain.

Overall, my first week here in Spain was an awesome week and I cannot wait to see what the next 5 weeks have in store!

Posted by Unknown at 9:32 AM No comments: